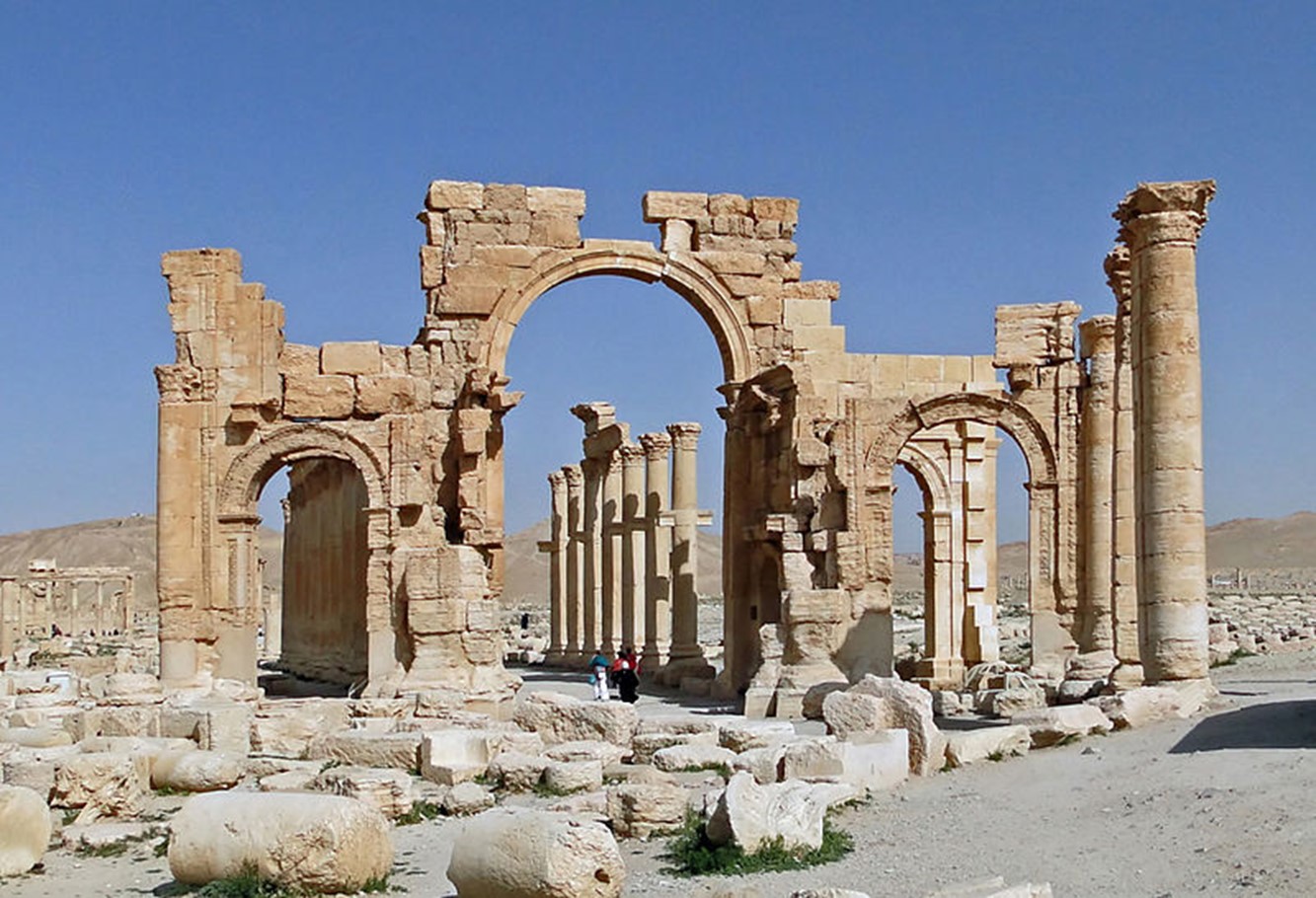 Do you remember all of the buzz about the arch from the Temple of Baal that was supposed to go up in Times Square back in April? Well, that project was ultimately canceled, but now it has been resurrected in a new form. In April a reproduction of a different arch, the Arch of Triumph, was erected in Trafalgar Square in London, and now another reproduction of that famous arch will be going up in New York City on September 19th. This particular arch is not the same one that once stood directly in front of the Temple of Baal in Syria. Rather, the Arch of Triumph was constructed at a later date by the Romans, and it served to link the main street of the Colonnade with the Temple. So there is still definitely a connection with the Temple of Baal, but it is not as direct as had originally been envisioned.

The organization behind this effort is the Institute for Digital Archaeology. They are extremely excited to be bringing this project to New York next month as you can see from this excerpt which comes from their official website…

There are few cities in the world as much defined by their architecture as New York. The Empire State Building, the Statue of Liberty, the Brooklyn Bridge — all symbols of the audacity, strength, technical prowess, diversity and optimism of what Ezra Pound called “the most beautiful city in the world.” It is also a city that has known terrible loss — first and foremost the loss of life, but also the loss of familiar landmarks that helped inform the city’s identity. The Triumphal Arch, a symbol of resilience in the face of loss, will be a fitting tribute to America’s great metropolis. The arch will stand in Manhattan, surrounded by buildings adorned with classical features suggesting the common cultural roots of East and West. We hope that you will visit us this fall to consider the relationship between people and the places they inhabit.

Their website also features a public letter from their executive director which confirms that September 19th is the date when this arch will go up. You can read the public letter for yourself right here… 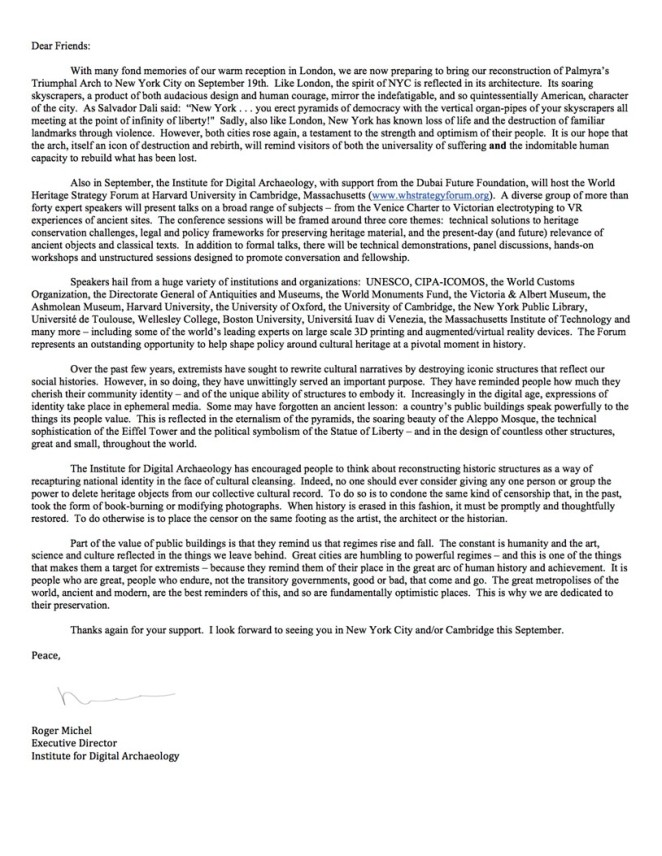 So we have it directly from the source that September 19th is the official date when the arch will be unveiled.

I find it very interesting that one of the reasons why New York was picked was to remind visitors of “the indomitable human capacity to rebuild what has been lost.” Of course that is a reference to 9/11, and in his book The Harbinger, Jonathan Cahn has pointed out all of the parallels between America’s bold pronouncements to rebuild in the aftermath of 9/11 and Israel’s defiant statements as recorded in Isaiah 9:10…

When a reproduction of the Arch of Triumph was put up in Trafalgar Square back in April, it was also described by a major British news source as “an act of defiance”…

A monumental recreation of the destroyed Arch of Triumph in Palmyra, Syria, has been unveiled in London’s Trafalgar Square.

The 1,800-year-old arch was destroyed by Islamic State militants last October and the 6-metre (20ft) model, made in Italy from Egyptian marble, is intended as an act of defiance: to show that restoration of the ancient site is possible if the will is there.

Many people have never heard of the Arch of Triumph, but it is actually a UNESCO World Heritage site. The following is some basic information about it from Wikipedia…

The Monumental Arch, also called the Arch of Triumph(Arabic: قوس النصر‎‎) or the Arch of Septimius Severus, was a Roman ornamental archway in Palmyra, Syria. It was built in the 3rd century during the reign of emperor Septimius Severus. Its ruins later became one of the main attractions of Palmyra, until it was destroyed by the Islamic State of Iraq and the Levant in October 2015. Most of its stonework still survives and there are plans to rebuild it using anastylosis.

The Monumental Arch was built sometime during the reign of emperor Septimius Severus, which lasted from 193 to 211 AD; it linked the main street of the Colonnade and the Temple of Bel.[1] The arch was meant to integrate the southern and central parts of the Colonnade as its location marks a change of 30° in the orientation of the street.[2]

According to some sources, the structure was built as atriumphal arch to commemorate the Romans’ victories over the Parthians.

Once again, I think that there is something important that I need to point out. The Romans constructed this arch after a victory over Parthia, and in his extraordinary book on the Parthians Stephen M. Collins has shown that the Parthian Empire was largely made up of people that came from the northern tribes of Israel. So the original purpose of this arch was to celebrate victory over Israel.

Is that really something that we want to put up in New York?

And even though this arch did not stand directly in front of the Temple of Baal in Syria, it was part of the overall complex. In a previous article, I pointed out the similarities between the child sacrifice that would be done to honor Baal in ancient times and what is taking place in America today. This is what Jeremiah 19:4-6 says…

Jeremiah 19:4-6 Because they have forsaken me, and have estranged this place, and have burned incense in it unto other gods, whom neither they nor their fathers have known, nor the kings of Judah, and have filled this place with the blood of innocents; They have built also the high places of Baal, to burn their sons with fire for burnt offerings unto Baal, which I commanded not, nor spake it, neither came it into my mind: Therefore, behold, the days come, saith the LORD, that this place shall no more be called Tophet, nor The valley of the son of Hinnom, but The valley of slaughter.

Needless to say, we have killed far more of our own sons and daughters than the Baal worshippers of the ancient world ever did. Since Roe v. Wade was decided in 1973, more than 58 million children have been murdered in this country.

So it somehow seems appropriate that this arch is going up in the heart of our most important city. We have so much in common with the ancient pagan world, and so it makes sense that we would want to celebrate their culture.

Unless something dramatically changes at the last minute, this arch is going to be put up in New York City on September 19th.

Unfortunately, most New Yorkers are not going to have any idea what the real story behind this arch really is.

Live streams of each of the Antichrist's events in America, click here

Bible Verse of the Day and Software:

View Verse of the Day